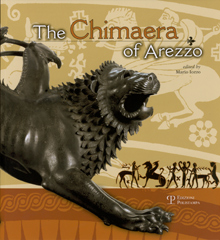 The Chimaera of Arezzo

This volume is the catalog of the exhibition The Chimera of Arezzo, displayed at the J. Paul Getty Museum at the Getty Villa in Los Angeles from July 16th, 2009 to February 8th, 2010.
Discovered outside of Porta S. Lorentino in Arezzo in 1553, this impressive Etruscan bronze dates back to the 5th century B.C. and is usually housed in the Museo Archeologico Nazionale in Florence. It depicts a mythical beast with characteristics of a lion, a goat and a serpent; she is the daughter of the giants Typhoon and Echidna, and was vanquished by the hero Bellerophon on the back of the winged horse Pegasus. For Florence, the Chimera is more than an exceptional archaeological artifact: it is a symbol, the first piece of a Granducal collection and an object much admired by Cosimo I, according to Benvenuto Cellini. Today, for the very first time, this unique and irreplaceable masterpiece of Etruscan bronzework will be presented to the American public along with several other works from the collection of the Getty Museum and Research Library.
Beyond the presentation of the works exhibited, this volume outlines the history of the myth of the Chimera, and elaborates on this precious Etruscan bronze and the image of this monstrous creature in the Etruscan world through the scientific contributions of Fulvia Lo Schiavo, Karol Wight, Claire L. Lyons, Seth D. Pevnick, G. Carlotta Cianferoni, Adriano Maggiani, Mario Iozzo.